Some of the acts may seems strange to a visitor, but the Illyria Sexual Fundamentalists are very powerful group, although separated from the militant

Some of the texts are preserved from the time when the first Indian restraurant was open on Illyria and Kama Sutra was introduced to the general public. It became a required reading in Sunday schools during the Cuban crisis (Illyrians believe that foreign policy must be also sexually oriented to prevent the military conflicts).

Here are some quotations from the Holy Book of Illyria:

“Kama is the enjoyment of appropriate objects by the five senses of hearing, feeling, seeing, tasting, and smelling, assisted by the mind together with the soul. The ingredient in this is a peculiar contact between the organ of sense and its object, and the consciousness of pleasure which arises from that contact is called Kama.

Kama is to be learnt from the Kama Sutra (aphorisms on love) and from the practice of citizens.”

The only university on the island offers a BFA degree in Performance and Multimedia:

The following are the arts to be studied, together with the Kama Sutra:

1. Singing
2. Playing on musical instruments.
3. Dancing.
4. Union of dancing, singing, and playing instrumental music.
5. Writing and drawing.
6. Tattooing.
7. Arraying and adorning an idol with rice and flowers.
8. Spreading and arraying beds or couches of flowers, or flowers upon the ground.
9. Coloring the teeth, garments, hair, nails, and bodies, i.e., staining, dyeing, coloring and painting the same.
10. Fixing stained glass into a floor.
11. The art of making beds, and spreading out carpets and cushions for reclining.
12. Playing on musical glasses filled with water.
13. Storing and accumulating water in aqueducts, cisterns and reservoirs.
14. Picture making, trimming and decorating.
15. Stringing of rosaries, necklaces, garlands and wreaths.
16. Binding of turbans and chaplets, and making crests and top-knots of flowers.
17. Scenic representations. Stage playing.
18. Art of making ear ornaments.
19. Art of preparing perfumes and odors.
20. Proper disposition of jewels and decorations, and adornment in dress.
21. Magic or sorcery.
22. Quickness of hand or manual skill.
23. Culinary art, i.e., cooking and cookery.
24. Making lemonades, sherbets, acidulated drinks, and spirituous extracts with proper flavor and color.
25. Tailor’s work and sewing.
26. Making parrots, flowers, tufts, tassels, bunches, bosses, knobs, etc., out of yarn or thread.
27. Solution of riddles, enigmas, covert speeches, verbal puzzles and enigmatical questions.
28. A game, which consisted in repeating verses, and as one person finished, another person had to commence at once, repeating another verse, beginning with the same letter with which the last speaker’s verse ended, whoever failed to repeat was considered to have lost, and to be subject to pay a forfeit or stake of some kind.
29. The art of mimicry or imitation.
30. Reading, including chanting and intoning.
31. Study of sentences difficult to pronounce. It is played as a game chiefly by women and children, and consists of a difficult sentence being given, and when repeated quickly, the words are often transposed or badly pronounced.
32. Practice with sword, single stick, quarter staff, and bow and arrow.
33. Drawing inferences, reasoning or inferring.
34. Carpentry, or the work of a carpenter.
35. Architecture, or the art of building.
36. Knowledge about gold and silver coins, and jewels and gems.
37. Chemistry and mineralogy.
38. Coloring jewels, gems and beads.
39. Knowledge of mines and quarries.
40. Gardening; knowledge of treating the diseases of trees and plants, of nourishing them, and determining their ages.
41. Art of cock fighting, quail fighting and ram fighting.
42. Art of teaching parrots and starlings to speak.
43. Art of applying perfumed ointments to the body, and of dressing the hair with unguents and perfumes and braiding it.
44. The art of understanding writing in cipher, and the writing of words in a peculiar way.
45. The art of speaking by changing the forms of words. It is of various kinds. Some speak by changing the beginning and end of words, others by adding unnecessary letters between every syllable of a word, and so on.
46. Knowledge of language and of the vernacular dialects.
47. Art of making flower carriages.
48. Art of framing mystical diagrams, of addressing spells and charms, and binding armlets.
49. Mental exercises, such as completing stanzas or verses on receiving a part of them; or supplying one, two or three lines when the remaining lines are given indiscriminately from different verses, so as to make the whole an entire verse with regard to its meaning; or arranging the words of a verse written irregularly by separating the vowels from the consonants, or leaving them out altogether; or putting into verse or prose sentences represented by signs or symbols. There are many other such exercises.
50. Composing poems.
51. Knowledge of dictionaries and vocabularies.
52. Knowledge of ways of changing and disguising the appearance of persons.
53. Knowledge of the art of changing the appearance of things, such as making cotton to appear as silk, coarse and common things to appear as fine and good.
54. Various ways of gambling.
55. Art of obtaining possession of the property of others by means of mantras or incantations.
56. Skill in youthful sports.
57. Knowledge of the rules of society, and of how to pay respects and compliments to others.
58. Knowledge of the art of war, of arms, of armies, etc.
59. Knowledge of gymnastics.
60. Art of knowing the character of a man from his features.
61. Knowledge of scanning or constructing verses.
62. Arithmetical recreations.
63. Making artificial flowers.
64. Making figures and images in clay.

Required activities must be reported by the citizens on April 15 (along with their tax forms) as annual self-evaluation of sexual performance.

The following are the things to be done occasionally as diversions or amusements:

“The following women are not to be enjoyed:

In addition to Prime-Minister, who is elected every three month to avoid political crises, Illyria has King, elected by women only, and Queen, elected by men for life. They usually die in young age since they have to perform sexual acts for the public from 9 to 5 daily.

“Each nation has a right for its national culture,” Sir Toby smiled, “We based our revised constitution on US Constitution, but with some specifications like `Persuade of SEXUAL happiness.’ We believe that this was the original intend of the founding fathers, which couldn’t be expressed in the puritan society of their time.”

I had to leave to visit Illyria’s MIT where the scientists are working on transmitting sexual energy into electrisity to solve Illyria’s dependence on Arab oil. 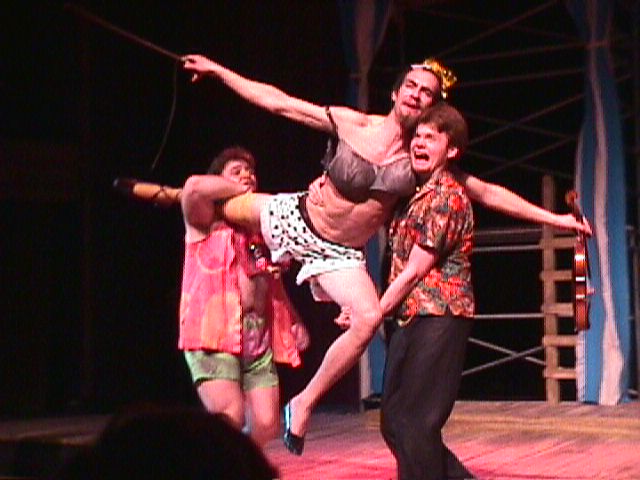 ... mixing together all my past productions, something I wanted for HamletDreams.

... same with the costumes?