No author's name, not even Shakespeare's, has the talismanic effect of Chekhov's. Speak that name to any intelligent reader or theatergoer and his eye turns inward, though not away, and his mouth drifts into a soft, private smile. Chekhov belongs to everyone who knows him. Accidental Writer : Anton Chekhov's remarkable career. By Stanley Kauffmann

DOCTOR [comes in; walking as though sober without staggering, he walks across the room, stops, looks round; then goes up to the washing-stand and begins to wash his hands.] The devil take them all... damn them all. They think I'm a doctor, that I can treat all sorts of complaints, and I really know nothing about it, I've forgotten all I did know, I remember nothing, absolutely nothing. [OLGA and NATASHA go out unnoticed by him.] The devil take them. Last Wednesday I treated a woman -- she died, and it's my fault that she died. Yes... I did know something twenty-five years ago, but now I remember nothing, nothing. Perhaps I'm not a man at all but only pretend to have arms and legs and head; perhaps I don't exist at all and only imagine that I walk around, eat and sleep [weeps]. Oh, if only I didn't exist! [Stops weeping, morosely] I don't care! I don't care a scrap! [a pause] Who the hell knows.... The day before yesterday there was a conversation at the club: they talked about Shakespeare, Voltaire.... I've read nothing, nothing at all, but I looked as though I'd read them. And the others did the same as I did. The vulgarity! The meanness! And that woman I killed on Wednesday came back to my mind... and it all came back to my mind and everything seemed nasty, disgusting and all twisted in my soul.... I went out and got drunk...

Performing Chekhov ISBN: 0415189349 Author: Allen, David Publisher: Routledge Subject: Chekhov, Anton Pavlovich Subject: Theater - Reference Subject: Theater - Direction & Production Subject: Theater - History & Criticism Publication Date: March 2000
Performing Chekhov is a unique and remarkably comprehensive guide to Chekhov's plays in performance. Drawing on extensive interviews with actors, directors and designers, it offers in-depth case studies of a number of significant and often controversial productions of Chekhov's plays. It focuses on the work of key directors in Russia, America and England and reflects a number of significant and on-going debates, not only about Chekhov's work, but about very nature of acting and performance. 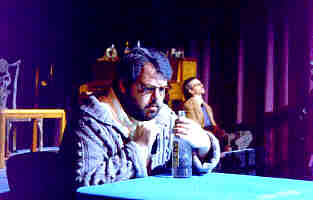 Chekhov: "When a lot of remedies are suggested for a disease, that means it can't be cured."

"Chebutykin, the physician, is a pleasant man who has withdrawn from helping others and taken solace in alcohol. Has he seen too much suffering in his life and simply burned-out? Why has he given up the practice of medicine?

Unlike some of Chekhov's physicians who continue to practice after they have lost their altruism, Chebutykin has simply withdrawn. Compare him, for example, with Ionych in Chekhov's story, "Ionych" (see this database), who has replaced altruism as motivation with greed. Consider also Astrov in Uncle Vanya (see this database), who struggles on with his profession, even though he is disillusioned with the results of his efforts." *

Back to CHEKHOV PAGES (use menu on the right)!

... There are hints in the text of Three Sisters: mention of the railroad, a clear sense of distance from Moscow, nice climate, birch trees, etc. Does anyone know what city is the setting for the play? Is it Taganrog where Chekhov was born? Was it a town on the then new Trans-Siberian? He mentions a river. Is it Yaroslval on Volga, Krasnoyarsk on the mighty Yenisei, or maybe it was Irkutsk? The Trans-Siberian had not reached Irkutsk in 1900 - not until 1904. Is that why he mentions the railway station was 18 miles away (and no one seems to know why)?
The Theatre Banner Exchange

Chekhov: "I am afraid of those who will look for tendenciousness between the lines and who are determined to see me either as a liberal or a conservative. I am neither a liberal nor a conservative, neither a gradualist nor a monk nor an indifferentist.
I would like to be nothing more than a free artist, and I regret that God did not give me the gift to be one. I hate falseness and coercion in all their forms .... Pharisaism, stupidity and arbitrariness reign not merely in merchants' houses and police stations: I see them in science, in literature, among the young.
That is why I have no particular passion for either policemen or butchers or scientists or writers or the young. I consider brand-names and labels a prejudice.
My holy of holies is the human body, health, intelligence, talent, inspiration, love, and absolute freedom, freedom from force and falseness in whatever form they express themselves. That's the platform I'd subscribe to if I were a great artist."

Chekhov: "You must trust and believe in people or life becomes impossible."

"Chekhov: Take 2" -- "Four Jokes + One Funeral", 1904 Anton's death (new one-act): last day, last hour. Six years since I directed "The Three Sisters" (why now and why the farces?)
Annensky about Chekhov (in Russian, the summer read), I envy the style -- very personal, almost if he himself wrote the play, as if he knows them, Masha, Olga, Irina... The secondary characters became the heroes, the jerks, the types from the comedies -- and we got the tragedy, Beckett only finished this journey... Now -- The American mini-Chekhov!

Chekhov: "To judge between good and bad, between successful and unsuccessful would take the eye of a god."

Chekhov: "A writer is not a confectioner, a cosmetic dealer, or an entertainer. He is a man who has signed a contract with his conscious and his sense of duty."