Amadeus (1984) The satirical sensibilities of writer Peter Shaffer and director Milos Forman (One Flew over the Cuckoo's Nest) were ideally matched in this Oscar-winning movie adaptation of Shaffer's hit play about the rivalry between two composers in the court of Austrian Emperor Joseph II--official royal composer Antonio Salieri (F. Murray Abraham), and the younger but superior prodigy Wolfgang Amadeus Mozart (Tom Hulce). The conceit is absolutely delicious: Salieri secretly loathes Mozart's crude and bratty personality, but is astounded by the beauty of his music. That's the heart of Salieri's torment--although he's in a unique position to recognize and cultivate both Mozart's talent and career, he's also consumed with envy and insecurity in the face of such genius. That such magnificent music should come from such a vulgar little creature strikes Salieri as one of God's cruelest jokes, and it drives him insane. Amadeus creates peculiar and delightful contrasts between the impeccably re-created details of its lavish period setting and the jarring (but humorously refreshing and unstuffy) modern tone of its dialogue and performances--all of which serve to remind us that these were people before they became enshrined in historical and artistic legend. Jeffrey Jones, best-known as Ferris Bueller's principal, is particularly wonderful as the bumbling emperor (with the voice of a modern midlevel businessman). The film's eight Oscars include statuettes for Best Director Forman, Best Actor Abraham (Hulce was also nominated), Best Screenplay, and Best Picture.

Amadeus : A Play by Peter Shaffer by Peter Shaffer -- 0riginating at the National Theatre of Great Britain, Amadeus was the recipient of both the Evening Standard Drama Award and the Theatre Critics Award. In the United States, the play won the coveted Tony Award and went on to become a critically acclaimed major motion picture winning eight Oscars, including Best Picture.
Now, this extraordinary work about the life of Wolfgang Amadeus Mozart is available with a new preface by Peter Shaffer and a new introduction by the director of the 1998 Broadway revival, Sir Peter Hall. Amadeus is a must-have for classical music buffs, theatre lovers, and aficionados of historical fiction. 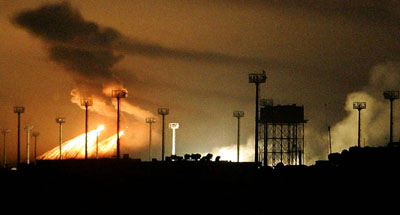 Get Site Info Essential Mozart: 32 Of His Greatest Masterpieces

[ I am not sure that I like Mozart's interpretation (character), I am sure I believe it. NTL, a clever trick. ]

Salieri finds absolute beauty in music and so asks God to grant him the gift of artistic inspiration m his compositions He came to appreciate the beauty of music at a young age, noting, "when I was ten a spray of sounded notes would make me dizzy almost to falling." Unfortunately, he finds this absolute beauty only in Mozart's compositions. When Mozart plays, he confesses that he hears the "voice of God," and he responds with such delight that it makes him tremble.

* Define existentialism and discover how playwrights have incorporated this theme in their plays. What existential elements do you find in Amadeus?

* Read Shaffer's Equus and compare its themes to those of Amadeus. What differences do you find? What similarities do you find? Can you find a pattern in both plays?