There are 5 parts in this directory:

... five enterences. If five is enough.

... The novel is not discovered yet. The thought.

One man against all.

One man against the world.

One man against life...

Dostoevsky called it -- Man against God.

One day in May 1862, when he opened the door of his apartment, Dostoevsky found one entitled "Young Russia." It called for revolution, socialism, the closing of monasteries, the emancipation of women, and the abolition of marriage and the family. And if the defenders of the imperial party resisted, it proclaimed, "we will kill [them] in the streets...in their homes, in the narrow lanes of towns, in the broad avenues of cities, in hamlets and in villages!" And this is how the great novel was born.

Devils' ('Besy'), also known in English as 'The Possessed' and 'The Demons' is the third of Dostoevsky's five major novels. It is at once a powerful political tract and a profound study of atheism, depicting the disarray which follows the appearance of a band of modish radicals in a small provincial town. Dostoevsky compares the radicals to the devils that drove the Gadarene swine over the precipice in his vision of a society possessed by demonic creatures that produce devastating delusions of rationality. The novel is full of buffoonery and grotesque comedy. The plot is loosely based on the details of a notorious case of political murder, but Dostoevsky weaves suicide, rape, and a multiplicity of scandals into a compelling story of political evil.

The Possessed was on wish list for almost forty years, from time I read the book for the first time as a teenager. After 9/11 I was waiting for a serious investigation into the nature of terrorism, beyond the news. I reread the famous French writer Camus's adaptation of The Possessed, written in 1959 after the war in Algers. And this is how this title moved to the top of my short wishlist and -- into 2003-2004 Theatre UAF season.

I had to rework many scenes, before and during of our rehearsals. This is perhaps the most complex and challenging project I ever was involved in. No, this is not a direct comments on our present war on terror, but an investigation of the human soul in terror, which results into total evil. "In an abstract love for humanity one almost always loves only oneself," Dostoevsky wrote, describing the intellectual grounds for terorrist attitude. Man, not connected with himself, history, other people, past and future, on his way to start his total war against all. "I am one and they are all" -- Dostoevsky, Notes From Underground.

Russian novelist, journalist, short-story writer whose psychological penetration into the human soul had a profound influence on the 20th century novel. Dostoevsky novels are ultimately dialogic. He presented interacting characters with contrasting views or ideas, any of which may be used as a key to reading the text as whole. Dostoevsky's central obsession was God, whom his characters constantly search through pain, evil and humiliations.

Dostoevsky was born in Moscow, as the second son of a former army doctor. He was educated at home and at a private school. Shortly after the death of his mother in 1837 he was sent to St. Petersburg, where he entered the Army Engineering College. In 1839 Dostoevsky's father died propably of apoplexy but there was strong rumors that he was murdered by his own serfs. Dostoevsky graduated as a military engineer, but resigned in 1844 his commission to devote himself to writing. His first novel, Poor Folk appeared in 1846. It was followed by The Double, which depicted a man who was haunted by a look-alike who eventually usurps his position.

In 1846 he joined a group of utopian socialists. He was arrested in 1849 during a reading of Vissarion Belinsky's radical letter Selected Passages from Correspondence with Friends, and sentenced to death. With mock execution the sentence was commuted to imprisonment in Siberia. Dostoevsky spent four years in hard labor and four years as a soldier in Semipalatinsk. These events provided subject matter for the author. His heroes and heroines reflected moral values which were vitally important for the author. They also were men and women of action, who shaped the moral character of the young in Russia. During the years in Siberia Dostoevsky became a monarchist and a devout follower of the Russian Orthodox Church.

Dostoevsky returned to St. Petersburg in 1854 as a writer with a religious mission and published three works that derive in different ways from his Siberia experiences: The House of the Dead, a fictional account of prison life, The Insulted and Injured, which reflects the author's refutation of naive Utopianism in the face of evil, and Winter Notes on Summer Impressions, his account of trip to Western Europe.

The Insulted and Injured was completed after Dostoevsky's penal service and exile and published on his return to Petersburg. The narrator is Ivan Petrovich, a young aspiring writer. His literary debut, working methods and social situation were taken from Dostoevsky's own life. The hero falls from the fame into poverty. When the book appeared it was coldly received by the critics. Dostoevsky defended the work in an open letter and wrote that he knew for certain that even though the novel should be a failure, there would be poetry in it and the two most important characters would be portrayed truthfully and even artistically.

In 1857 Dostoevsky married Maria Isaev, a 29-year old widow. He resigned from the army two years later. Between the years 1861 and 1863 he served as editor of the monthly periodical Time, which was later suppressed because of an article on the Polish uprising. In 1862 he went to abroad for the first time.

In 1864-65 his wife and brother died and he was burdened with debts, making his situation even worse by gambling. From the turmoil of the 1860s emerged Notes from the Underground, psychological study of an outsider, which marked a watershed in Dostoevsky artistic development. The novel starts with a confessions by a mentally ill narrator and continues with the promise of spiritual rebirth. It was followed by Crime and Punishment, an account of an individual's fall and redemption, The Idiot, depicting a Christ-like figure, Prince Myshkin, through whom the author revealed the bankruptcy of Russia, and The Possessed, an exploration of philosophical nihilism.

Dostoevsky married in 1867 Anna Snitkin, his 22-years old stenographer, who seems to have understood her husband's manias and rages. They traveled abroad and returned in 1871. From 1873 to 1874 Dostoevsky was editor of the conservative weekly Citizen, and in 1876 he founded his own monthly, The Writer's Diary.

By the time of The Brothers of Karamazov, which appeared in 1879-80, Dostoevsky was recognized in his own country as one of its great writers. Dostoevsky final novel culminated his lifelong obsession with patricide - the assumed murder of his father had left deep marks on the author's psyche in childhood. The novel is constructed around a simple plot, dealing with the murder of the father of the Karamazov family by his illegitimate son, Smerdiakov. One of the sons, Dmitri, is arrested. The brothers represent three aspects of man's being: reason (Ivan), emotion (Dmitri) and faith (Alesha). This material is transcended into a moral and spiritual statement of contemporary society.

An epileptic all his life, Dostoevsky died in St. Petersburg on February 9 (New Style), 1881. He was buried in the Aleksandr Nevsky monastery, St. Petersburg.

Dostoyevsky's novels anticipated many of the ideas of Nietzsche, and Freud, and influenced among others such non-Russian writers as Thomas Mann and Albert Camus. In his essays Dostoevsky strongly supported the Westernizers, who believed that the modernization of Russia by Peter the Great had been for the best, while Slavophiles argued that modernization buried age-old Russian social and cultural values. Dostoevsky was strongly influenced by such thinkers as Aleksandr Herzen and Vissarion Belinsky. He saw that great art must have liberty to develop on its own terms, but it always addresses central social concerns.

No rehearsals on Mon. I need to cut another 40 pp. from Camus and post the list of roles for you (Monday). We will have a new (short) script on Wed.

Heather, I want to bring in the girl from Stavrogin's past. In his imagination she still lives. I have to text for her -- how she saw it, why did she kill herself. I need to talk with your about this part.

Multiple Stavrogin: I still didn't make my mind -- several actors playing this character (he is different -- like in Maria Lebyatkin act II scene), or to give some of his lines to the rest of the cast (voices in his head)?

Peter Verhovensky's problem: the myth roots -- a smaller devil? If Stavrogin is the "Prince" (of darkness, who betraied his nature of the Prince of Light, Lucifer), who is this man?

Each character must have this mythical type.

And there is his mother -- another woman in love with him.

Attraction to Stavrogin by men (another issue).

I don't know when we will come with the sound for you (Bach, techno, sound effects), possible live DJ to mix. -- but I need to break this Chekhovean text to support the title -- The Possessed.

I asked you to post your thoughts-feelings on the play, please do.

To be an American is of itself almost a moral condition, an education and a career. --Santayana: Materialism and Idealism in American Life (1920) 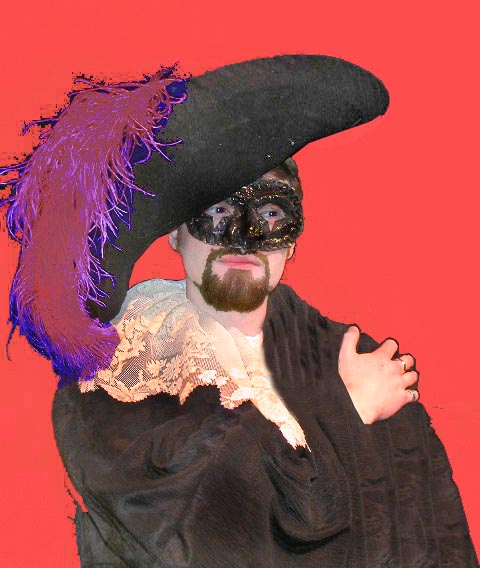 Don Juan: Spring 2003... and the result of the humanism and high modernity now.