DON JUAN or THE STONE GUEST

11. Stature of Commador (samr as A SPECTRE)

The scene is in Sicily (according to Moliere).

A synopsis of the play by Moliere

DON JUAN was produced at the Palais Royal, Paris, February 15, 1665, with Moliere playing the part of Sganarelle.

DON JUAN is a graceless brigand of hearts, the despair of his servant, Sganarelle, and of his upright father who must repeatedly rescue him from some scrape. Don Juan's favorite method of procedure is to go through a secret mock marriage. This satisfies the girl yet leaves him legally free when he tires of her charms. His latest conquest is the beautiful Elvire whom he has enticed from a convent to "marry" him.

Now, in spite of Sganarelle's protests and warnings of Heaven's wrath, Don Juan has abandoned Elvire and is plotting to carry off the fiancée of a friend. With this purpose master and man embark in a small boat on the lake where the engaged couple have planned to go sailing. During a sudden squall, the small boat is overturned and both would have perished except for their timely rescue by a peasant. Scarcely are Don Juan's fancy clothes dried, before he is again at his lovemaking . . . this time proposing marriage to each of two peasant girls who fall to quarreling as to which of them will be favored. Sganarelle, sotto voice, informs them that his master will actually marry neither one.

At this point word reaches Don Juan that Elvire's brothers have sworn to kill him. Disguised beyond recognition, master and man set out to return to the city. On the way Don Juan rescues a stranger from robbers only to discover that he has saved the life of one of Elvire's brothers. Because of his vow of gratitude before he learns Don Juan's identity the stranger spares Don Juan's life for the nonce.

Once more on their way, Don Juan and Sganarelle come to the tomb of the Commandant who had been a recent victim. As a joke, Don Juan insists that Sganarelle must invite the statue to dinner. Sganarelle is frankly frightened and Don Juan is somewhat taken aback when the statue nods its acceptance and Sganarelle is terrified when at the dinner hour it actually appears. It is, the servant points out, a sign of Heaven's just wrath.

Heaven's wrath, however, does not concern Don Juan. It is his earthly troubles that decide him to pretend a conversion to religion. This hypocrisy proves the last straw for a long suffering Heaven. In the midst of his hypocritical cantings there is a great peal of thunder and Don Juan is swallowed up in a flaming abyss, leaving Sganarelle to remark:

"By his death everyone gets satisfaction. Heaven offended, laws violated, girls led astray, families dishonored, relatives outraged, wives ruined, husbands driven to despair, they all are satisfied. I am the only unlucky one. My wages, my wages, my wages!"

Next: DJ, the hero

From the Dramaturg(how should we spell it?) : Well I have finally been able to get back around to some more research and the fun just never ends. This time I was trying to find out about the etymological sources in the names of your characters - this is easier said than done when it comes to Sganarelle. So here is some of what I have found:

"DOM" is the French version of the Spanish Don (later DON) - both seem to derive from the Latin word: Dominicus meaning lord or master, and was given to those born on Sunday. Keep in mind that the Dom version was used in Portugal and Brazil when addressing a gentleman. I like this version not only because it is used more in the French versions, but it is also immediately related to the direct Latin definition, while Don is a step away relating back to Dom and than to the Latin root. There is also a Russian Don, but that relates to a river in central European and you have to ask Anatoly about that.

JUAN is a very common Spanish name, but the name Don Juan was infact invented by the character himself. As you already probably know, it is the masculine version of Juanita, etc., but more importantly how do I think this should be pronounced? HWAWN!

ELVIRA is directly gothic spanish and literally means "all true"- I like this twist, because the character herself represents many different truths as well as the fact that truth itself is determined by the individual. In regard to pronunciation, the transcription is [el vi'r_] there is a space there because the symbol for the vowel that is used is not available on my computer- but it is like a in ago.

GUSMAN (?)What do you guys think?

DON CARLOS is the Spanish, Portuguese version of Charles and is pronounced KAR-los. During the late seventeen hundreds there was Carlos Maria Isidro de Borbon who was known in spain as a pretender to the thrown- so there may be some significance to this name.
DON ALONSO is known in French as Alonse - definition (?)

DON LUIS is known in French as Louis which is a French form of Ludwig. Which was also the name of 18 kings in France- but the direct definition of this name means "famous". Now the French pronounciation of this is LOO-is, which reminds me of a Brooklyn accent and I think may be kinda' funny, but it is up to you. For the pronunciation of Luis, there is none because this name was made up by Moliere' himself, like the name Sganarelle.

CHARLOTTE- the harlett, is a French and English name and is the feminine pet form of Charles- their seems to be alot of Charles's appearing in these names. Anyway, the word also refers to a French desert made of fruit, gelatin, etc. in a MOLD lined with strips of bread= yummy! Altogether the name was very common throughout Europe adn the pronunciation is SHAR-lawt.

MATHURINE- as stated earlier this name was used for a famous female mime during the days of Comedia del Arte- there is also the name of Mathura which is Indian and is said to be the birth place of Krishna. For pronunciation all I have is the Indian phonetic transcription which is [mut'oo r_] again the space is for the vowel symbol pronounced like ago. This may sound really strange, BUT keep in mind that Moliere' played with these names and so can we. For example: mut ah' reen... math er ine... mat urine...

PETER has its roots in the Greek name Petros meaning a rock (COCK,HAHA), where in Spanish the name is actually Pedro and the French Pierre or Pierrot meaning Sparrow. It is up to us as to what version we want, I personally like Pedro - is sounds meaner. [ In Commedia, Pierrot ]

LA VIOLETTE has its roots in French relating to the color and the flower Violet. What I like about this name is that it is spelled like it sounds [vi'_ lit]. I can also see a correlation between the word Violent and Violette.

RAGOTIN is an abscure name that showed up on French web sites, but gave no definition. There was even a poster of the word sitting next to a person with a bottle in there hand. So does it mean "drunkered" or raga'muffin? No matter what it is a comedic word and may have been invented by Moliere' himself. This is also one that we can play with in regards to pronunciation: rag o tine...rago tin...ra gotin...

DIMANCHE literally means Sunday, Sabbath, the Lord's day in French and may have been coined by Racine the writer- as for pronunciation lets use the Old French version [de'emm ah enn ce'].

RAMEE literally means green boughs in French. And can be pronounced in the French version such as [e'r eh emm e']. Say that with a mouthful of ice cream -

So there is the lowdown on names, hope this helps.
Heatherturge 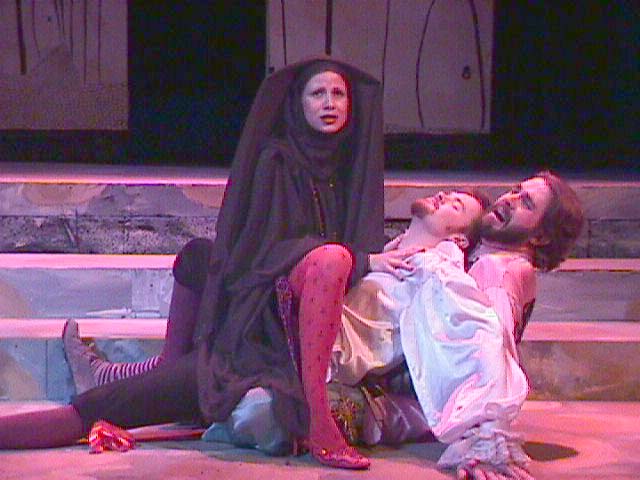