N. V. Gogol (1809-1852)
Russian novelist, playwright and short-essay writer. Gogol is recognized as one of the richest writers in Russian literature from the point of view of the imaginativeness and stylistic richness of his work. Gogol's choice of everyday life as the basis of much of his work had a profound effect on the future of Russian literature, although the degree and the purposes of his realism, as interpreted by Belinsky and later radical critics, are doubtful. Whether he intended or not, Gogol's work was held up as a model for later Russian writers, who turned their attention to a sympathetic observation and realistic description of the lower levels of Russian society. [p. 408-409]
source: Benet's Reader's Encyclopedia

Based on "The Inspector General" by Gogol

(MAYOR, SUPER, JUDGE, DIRECTOR are in the room. Voice on the tape "English for Beginners": "And now lets sing together! Ready? "Old Mcdonald had a farm..." Mayor sings, others follow).

MAYOR (Turns off the tape player): I have invited you all here to tell you -- it's coming.

ALL: Money!? Secretly? From where?

MAYOR: Let me show you a fax I've received from my friend in Moscow. (Reads) "An American businessman has arrived to investigate all of Siberia, and your region in particular. Although he pretends to be a tourist, he is in fact a millionaire, planning to invest billions."

ALL: Millionaire!? To us!? To invest!? Incredible! Unbelievable! Billions?! And to us?! 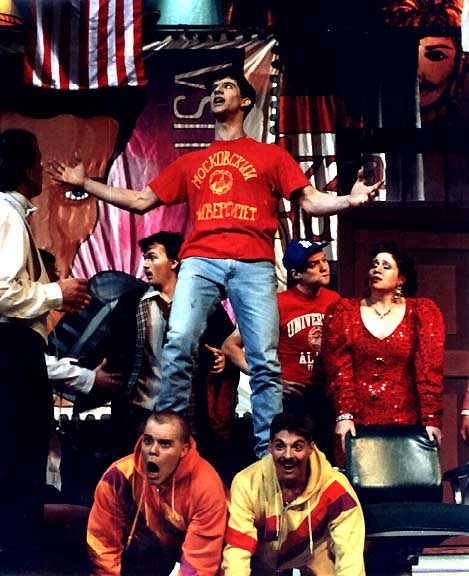 Based on the critically acclaimed Vancouver Playhouse Theatre production, The Overcoat is the long-awaited film directorial debut of award-winning theatre director Morris Panych. A play performed without dialogue, its performances, choreography, music and imagery tell a story that is full of joy and pathos. It telecasts on CBC Television's OPENING NIGHT on Thursday, January 10th at 8:00 p.m.

Inspired by a story by 19th-century Russian absurdist Nikolai Gogol, The Overcoat is set to the music of Dmitri Shostakovich, which is performed by the award-winning CBC Radio Orchestra.