Hamlet and Godot (World without Women)

Reversed roles in the breakup scene: Hamlet as Ophelia (III-1).

The first few times I read Hamlet, I always thought of Ophelia as the innocent destroyed by the political machinings of those around her and her tragedy was that, had she been a little more ruthless, a little more thick-skinned, she would have survived, pulled her man out of his downward spiral, and lived to a sensible old age as queen. Look at Elizabeth Woodville in the fifteenth century. She did just that. But no, Ophelia was a little too weak to survive... she had a love that she tried to keep pure and at the first sign of its fleeing, she died. That is what I thought at first. Now, I have different thoughts... which I shall have to continue later as I am late for class. -Heather

Death Scene over the Queens description of the Ophelia's death: the dance between two Ophelias, trying to save each other (continuation of the doubling of madness). The same with their passing through the gates-coffin. 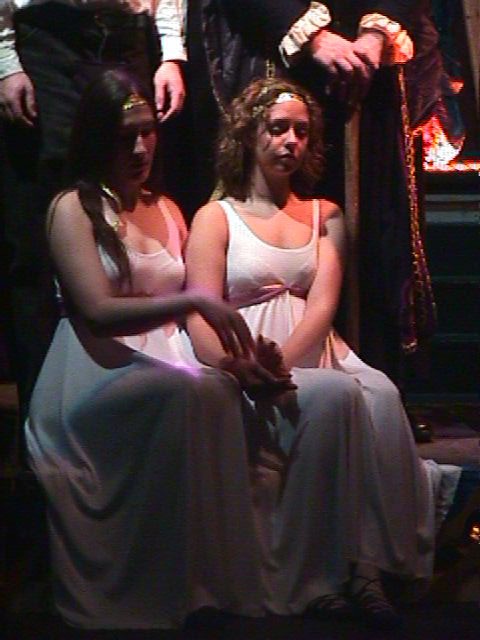 Mad Ophelia in underware and makeup?