Public = Dead, they are silent. They are waiting. Empty stage, lights only.

The whole show is the Post Scriptum for Shakespeare's Hamlet, reflections.

I do not know, if I will be using vtheatre forum for the "Dangerous Liaisons" in the Spring 2002; maybe only for the cyber-comments on the story and the characters.

Originally, I thought of the shows directory as the showcases for student-directors; to see how to work on the production, to use it as research and source material. I teach THR331 Fundamentals of Directing in the Spring and I hope I can use it for my class. Alas, I direct Dangerous Liaisons next semester and I know that I will talking mostly about it (that's why I already made a directory).

NB. Some ideas do not make it; it's natural. Some new ideas take their place. By the end of the production process there is a new show begins to grow in you...

The problem: I do not have the time for Post-Production period. To get the final cut, to do the sound mix and so on -- the best we can do it to clean the archives of the logs (messages) for the cyber-visitors -- and I do update the production webpages (photos, news).

Fortinbras -- military? Policeman? Does he enter? If Ophelia died pregnant, we hear the child's cry.

[ How to link all the vtheatre directories and what is the logic of the evolution of this VT project? ]

These are not so much questions about the play as about historical practices in choosing new rulers in Shakespeare's time, whether in Denmark or England.

Why does Claudius inherit the throne instead of Hamlet, son of the former king? Is it because succession goes to the brother (Claudius) if the son is not yet of a certain age? Or because Queen Gertrude has agreed to marry Claudius? Both? Is Gertrude in any way obliged to marry Claudius (even though her husband's ghost calls it "incest")?

Thus, do the spectres of Henry VIII and Mary, Queen of Scots also haunt this play (with James I succeeding Elizabeth only a couple years after HAMLET was written)?

Counterpoised against this weak reed is all the talk about the "election." In this WS got it absolutely correct. Danish kings were elected by assemblies of ur-nobles called, I believe, the Witan. While the elected king was frequently the natural heir of his predecessor, such was not always the case, as for example, when there was a more powerful contender or the natural heir was weak or young. The fact that Claudius won election over an intelligent 30 year old natural heir raises interesting possibilities about how Hamlet fils was perceived by the court.

Kings in England and Scotland were, I believe, also elected before the whole divine rights thing and inherited succession took off.

without rechecking my text I believe I remember that:

Claudius doesn't inherit the throne - he is elected to it. Hamlet says Claudius "Stepped in between the election and my hopes (act v sc ii)." Upon elder Hamlet's death, with the threat of Fortinbras on the border, the electors - the nobles of Denmark - in the name of national defense - hurredly elected Claudius king while student Hamlet was still returning from Whittenburg.

Gertrude too, it is implied, was induced to marry Claudius, seemingly to lend legitimacy to a crisis election situation. She was in no way obliged to marry her brother in law.

Hoping he remembers this correctly

> Why does Claudius inherit the throne instead of Hamlet, son of the former > king?

Hamlet is not in Denmark when the Norwegian threat is raised. They're not going to wait for him to get back from Wittenberg before they do anything about Fortinbras. (This is my biggest problem with the Franco Zeffirelli / Mel Gibson version -- if Hamlet is there for Hamlet Sr'.s funeral, why _doesn't_ he become king? Why choose Claudius if Hamlet Jr. is on the scene? The only justification for Claudius assuming the throne is that Hamlet is unavailable.)

> Thus, do the spectres of Henry VIII and Mary, Queen of Scots also haunt > this play (with James I succeeding Elizabeth only a couple years after > HAMLET was written)?

It's more the spectres of Edward II, Richard II, Henry VI and Edward V -- all those kids who interherited the throne and whose subsequent reigns (or lack of one, in Edward V's case) were disasters.

The major questions for me in all of Shakespeare's histories and tragedies has been "By what right does a ruler rule? How should power be transferred?" One might assume this would be on the minds of an nation whose ruler had never married and had no direct heir.

> Claudius doesn't inherit the throne - he is elected to it. Hamlet says > Claudius "Stepped in between the election and my hopes (act v sc ii)."

I wouldn't take this too litereally. "Election" in the medieval sense meant "elected by God." 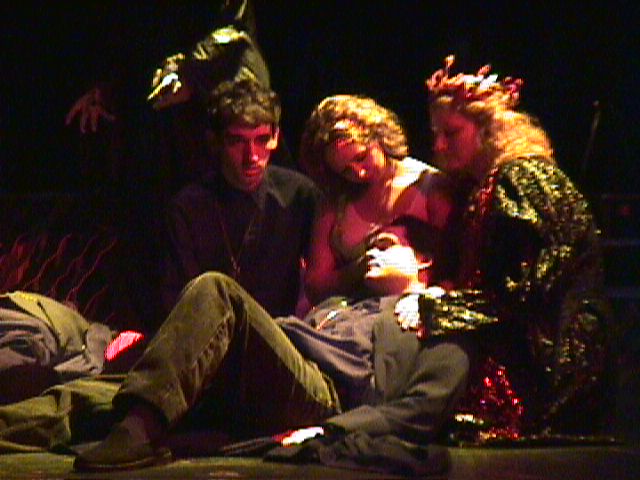