* (ätôl´ fyoo´gard, foo-) (Athol Harold Lanigan Fugard) , 1932-, South African playwright, actor, and director. In 1965 he became director of the Serpent Players in Port Elizabeth; in 1972 he was a founder of Cape Town's Space Experimental Theatre. One of the first white playwrights to collaborate with black actors and workers, Fugard writes of the frustrations of life in contemporary South Africa and of overcoming the psychological barriers created by apartheid . Some of his works, such as Blood Knot (1960), the first in his family trilogy, were initially banned in South Africa. Widely acclaimed, his plays include Boesman and Lena (1969), Sizwe Bansi Is Dead (1972), A Lesson from Aloes (1978), the semiautobiographical work Master Harold … and the Boys (1982), The Road to Mecca (1985), and Playland (1993). In his first two postapartheid plays, Valley Song (1995) and The Captain's Tiger (1998), Fugard addresses rather personal concerns, but in Sorrows and Rejoicings (2001) he focuses on the complex racial dynamics of South Africa's new era. Fugard has also written one novel, Tsotsi (1980).

Dear Mr.Antohin I am a Theater Arts Studient in Waterford in Southern Africa, and I have been studing south african theatre for while, especially Fugards work. I have an assignment to find out how i would set up 'The Island', in a modern kind of way. Sice the apartheid is over and the statement isn't that important anymore, and john and winston dont really do the part any more, i wanted to ask you for som information on how you went about setting it in 1996. For example what sort of improvisation work you did with your actors, and who you made it relevent for the 90's. anything would actually do. I would really appritiate if you wrote me back.
Best Regards,
Nis Wedel Lorenzen

I didn't stage it for a political reason, but for a strong exisitential message of the play. "Each man is an island" -- the two man try to find the way to their own selves by founding the way to each other. Anatoly 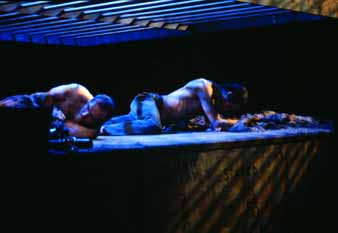 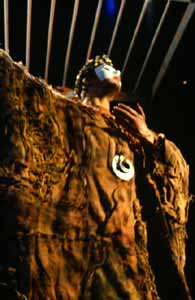 WINSTON: That’s not what I’m talking about. When you go to the quarry tomorrow, take a good look at old Harry. Look into his eyes, John. Look at his hands. They’ve changed him. They’ve turned him to stone. Watch him work with that chisel and hammer. Twenty perfect blocks of stone. Nobody else can do it like him. He loves stone. That’s why they’re nice to him. He’s forgotten himself. He’s forgotten everything…why he’s here, where he comes from. That’s happening to me John. I’ve forgotten why I’m here… [Scene 3]

[In the following scene, part of Scene 4, Winston and John perform Antigone for the other cellmates, Winston plays Antigone, John plays King Creon]

WINSTON: Who made the law forbidding the burial of my brother?

WINSTON: When Polynices died in battle, all that remained was the empty husk of his body. He could neither harm nor help any man again. What lay on the battlefield waiting for Hodoshe to turn rotten, belonged to God. You are only a man, Creon. Even as there are laws made by men, so too are there others that come from God…

JOHN: Your words reveal only that obstinacy of spirit which has brought nothing but tragedy to your people. First you break the law. Now you insult the State.

WINSTON: Just because I ask you to remember that you are only a man?

JOHN: And to add insult to injury you gloat over your deeds! JOHN: [again addressing the audience]. You have heard all the relevant facts. Needless now to call the state witnesses who would testify beyond reasonable doubt that the accused is guilty…There was a law. The law was broken. The law stipulated its penalty. My hands are tied. Take her from where she stands, straight to the Island! There wall her up in a cell for life, with enough food to acquit ourselves of the taint of her blood.

WINSTON: [to the audience]. Brothers and Sisters of the Land! I go now on my last journey. I must leave the light of day forever, for the Island, strange and cold, to be lost between life and death. So, to my grave, my everlasting prison, condemned alive to solitary death.
[Tearing off his wig and confronting the audience as Winston, not Antigone.] Gods of our Fathers! My Land! My Home!Time waits no longer. I go now to my living death, because I honoured those things to which honour belongs.

[The two men take off their costumes and then strike their ‘set’. They then come together and, as in the beginning, their hands come together to suggest handcuffs, and their right and left legs to suggest ankle-chains. They start running…John mumbling a prayer and Winston a rhythm for their three-legged run.The siren wails.Fade to blackout.]