* Amanda Wingfield: Once a Southern belle who was the darling of her small town's social scene, Amanda is now an abandoned wife and single mother living in a small apartment in St. Louis. She dreams of her past and of her daughter's future, but seems unwilling to recognize certain harsh realities of the present. She is a loving mother, but her demands can make life difficult for Laura and unbearable for Tom.

* Laura Wingfield: Crippled from childhood, Laura walks with the aid of a leg brace. Laura is painfully shy, unable to face the world outside of the tiny Wingfield apartment. She spends her time polishing her collection of tiny glass animals, her "glass menagerie." Her presence is almost ghostly, and her inability to connect with others outside of her family makes her dependent on Tom and Amanda. Jim's nickname for her, "Blue Roses," suggests both her odd beauty and her isolation, as blue roses exist nowhere in the real world. She is in many ways like Rose, Tennessee Williams' real-life sister.

* Tom Wingfield: Tom is an aspiring poet who works in the Continental Shoemakers warehouse. He is the narrator of the play: the action of the play is framed by Tom's memory. Tom loves his mother and sister, but he feels trapped at home. They are dependent on his wages, and as long as he stays with them he feels he can never have a life of his own. Nightly, he disappears to "go to the movies."

* Jim O'Connor: The long-awaited gentleman caller. He is outgoing, enthusiastic, and believes in self-improvement. He kisses Laura and raises her hopes before revealing to her that he is engaged. Tom describes him as a person more connected to the real world than any of the other characters are, but Jim is also a symbol for the "expected something that we live for."

THE MODERN DRAMA of Ibsen and Shaw and O'Neill--the long period of three generations in which, as we have said, the drama flourished in Europe, in Britain, and in America successively--seemed to have closed with World War II. Life with Father, whose comedic scene is laid at the beginning of that sixtyyear era, was written and produced at its end. Very different from Clarence Day's family reminiscences were those of the young poet and playwright who wrote The Glass Menagerie, ushering in the postwar drama.

VII. THE GLASS MENAGERIE [ from Preface to Drama: An Introduction to Dramatic Literature and Theater Art * Book by Charles W. Cooper; Ronald Press, 1955 ]

Tennessee Williams, originally Thomas Lanier, was born in 1911 in Columbus, Mississippi. He was the son of a traveling shoe salesman and a genteel minister's daughter. As a child, his family lived with his maternal grandparents of whom he was very fond. His father, Cornelius Coffin Williams, was of Tennessee frontiersman stock, his ancestors providing the state with its first governor and senator. Later in life, when Thomas Lanier changed his name to Tennessee, it wasn't difficult to determine the reason behind the name he chose. Williams said that as an adult with intentions of publishing, he had to change his name because his given name was tainted by a few publications of bad lyrical poetry from his teenage years.

In 1919 the shoe company promoted Williams' father, and the family moved to St. Louis. The move was hard on Williams and his sister Rose; until they moved to the city, the children had hardly been aware that their family was on the low end of the economic scale. Living in a Midwestern city where the schoolchildren made fun of their Southern accents, and living in a dingy apartment in one of many cookie cutter buildings, it was difficult to ignore their poverty.

Williams attended the University of Missouri for a brief while before working for three hated years at the shoe company that also employed his father. He then attended Washington University before finally landing at the University of Iowa, graduating in 1938. Williams had several menial jobs including work as a movie usher and poet-waiter, but he won a prize from the Group Theater in New York for a collection of one-act plays. After winning the prize, he became a client of the successful literary agent, Audrey Wood. He won the Rockefeller Fellowship in 1940 for his first full-length play, Battle of Angels, which had a catastrophic opening in Boston that year. Following that disappointment, he signed a six-month contract with MGM in 1943 as a scriptwriter, but the contract was broken when he submitted a script for The Gentleman Caller, which would later become The Glass Menagerie. Just before his move out to the West Coast in 1943, Williams' sister, Rose, underwent a prefrontal lobotomy because of her mental illness, and within The Glass Menagerie are echoes of his guilt for not sparing Rose from this operation.

The Glass Menagerie made its 1944 debut in Chicago and moved to New York in 1945 where it won the New York Drama Critics' Circle Award as well as the Pulitzer Prize for Drama. This play launched his success as a playwright, and the show ran for 563 performances at New York's Playhouse Theatre. After such a blazing success, Williams' won another Critics' Award and Pulitzer for perhaps his most lasting masterpiece, A Streetcar Named Desire in 1948. He won yet another Pulitzer in 1955 for Cat on a Hot Tin Roof.

"[Williams'] plays, varying from darkly gloomy to seriously affirmative to comic, represent a broad and frequently searching study of life in the South, that at their best, as in Streetcar, they rise above regionalism to universality," claims Southern Writers. "While his critical reputation varied widely for years, it is now clear that Williams is one of the two or three most important American playwrights, the most important to come out of the South."

I thought that I will use the Menagerie show-directory for character(s) analysis: something I have no room on script.vtheatre.net pages. It's only four of them: Tom, Laura, Amada and Jim. 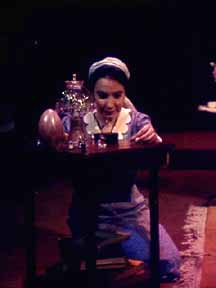 http://www.sparknotes.com/lit/menagerie -- SparkNotes TOM: "Mother, when you're disappointed, you get that awful suffering look on your face, like the picture of Jesus' mother in the museum." Part 1, Scene 2, pg. 15

TOM: "Every time you come in yelling that Goddamn 'Rise and Shine! Rise and Shine!' I say to myself, 'How lucky dead people are!' But I get up. I go! For sixty-five dollars a month I give up all that I dream of doing and being ever! And you say self -- self's all I ever think of. Why, listen, if self is what I though of, Mother, I'd be where he is -- GONE!" Part 2, Scene 3, pg. 23

and ps
Godot'06
"This was the compensation for lives that passed like mine, without any change or adventure. Adventure and change were imminent in this year. They were waiting around the corner for all these kids. Suspended in the mist over Berchtesgaden, caught in the folds of Chamberlain's umbrella. In Spain there was Guernica! But here there was only hot swing music and liquor, dance halls, bars, and movies, and sex that hung in the gloom like a chandelier and flooded the world with brief, deceptive rainbows. . . . All the world was waiting for bombardments!" Part 3, Scene 5, pg. 39

Next: back to SHOWS