Scenes for classes (Comedy and Opera)

[Exeunt all but Yum-Yum.

NANK. Yum-Yum, at last we are alone! I have sought you night and day for three weeks, in the belief that your guardian was beheaded, and I find that you are about to be married to him this afternoon!
YUM. Alas, yes!
NANK. But you do not love him?
YUM. Alas, no!
NANK. Modified rapture! But why do you not refuse him?
YUM. What good would that do? He's my guardian, and he wouldn't let me marry you!
NANK. But I would wait until you were of age!
YUM. You forget that in Japan girls do not arrive at years of discretion until they are fifty.
NANK. True; from seventeen to forty-nine are considered years of indiscretion.
YUM. Besides--a wandering minstrel, who plays a wind instrument outside tea-houses, is hardly a fitting husband for the ward of a Lord High Executioner.
NANK. But---- (Aside.) Shall I tell her? Yes! She will not betray me! (Aloud.) What if it should prove that, after all, I am no musician?
YUM. There! I was certain of it, directly I heard you play.
NANK. What if it should prove that I am no other than the son of his Majesty the Mikado?
YUM. The son of the Mikado! But why is your Highness disguised? And what has your Highness done? And will your Highness promise never to do it again?
NANK. Some years ago I had the misfortune to captivate Katisha, an elderly lady of my father's Court. She misconstrued my customary affability into expressions of affection, and claimed me in marriage, under my father's law. My father, the Lucius Junius Brutus of his race, ordered me to marry her within a week, or perish ignominiously on the scaffold. That night I fled his Court, and, assuming the disguise of a Second Trombone, I joined the band in which you found me when I had the happiness of seeing you! (Approaching her.)
YUM. (retreating). If you please, I think your Highness had better not come too near. The laws against flirting are excessively severe.
NANK. But we are quite alone, and nobody can see us.
YUM. Still, that don't make it right. To flirt is capital.
NANK. It is capital!
YUM. And we must obey the law.
NANK. Deuce take the law!
YUM. I wish it would, but it won't!
NANK. If it were not for that, how happy we might be!
YUM. Happy indeed!
NANK. If it were not for the law, we should now be sitting side by side, like that. (Sits by her.)
YUM. Instead of being obliged to sit half a mile off, like that. (Crosses and sits at other side of stage.)
NANK. We should be gazing into each other's eyes, like that. (Gazing at her sentimentally.)
YUM. Breathing sighs of unutterable love--like that. (Sighing and gazing lovingly at him.)
NANK. With our arms round each other's waists, like that. (Embracing her.)
YUM. Yes, if it wasn't for the law.
NANK. If it wasn't for the law.
YUM. As it is, of course we couldn't do anything of the kind.
NANK. Not for worlds!
YUM. Being engaged to Ko-Ko, you know!
NANK. Being engaged to Ko-Ko! 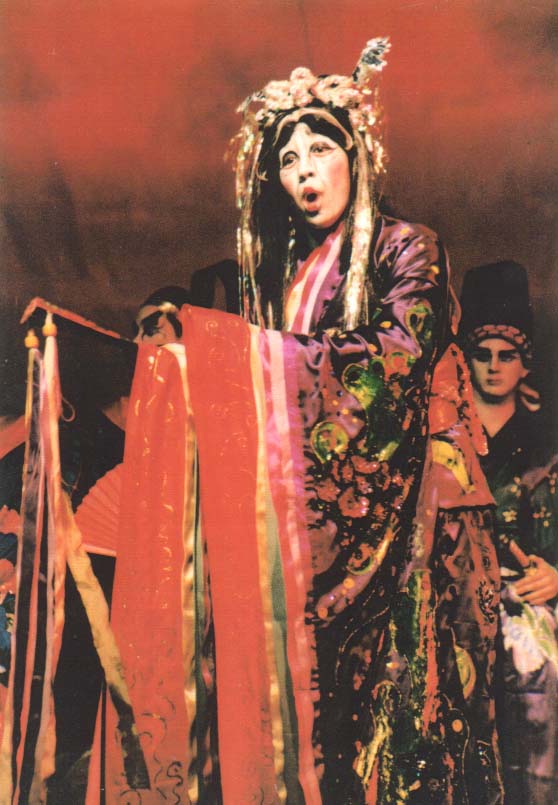 exer. on visualization and physicalization (in class and homework)

The Moscow Times at www.themoscowtimes.com/context --- By John Freedman

How ironic that the Bolshoi Theater’s “The Children of Rosenthal” is on the tongues of so many in the world this week for all the wrong reasons.

Why did one politician start crying “pornography” before he’d heard or seen anything? Was a youth group really preparing to disrupt the premiere? Is it possible that the Bolshoi, or someone around it, actually orchestrated this to guarantee a publicity blitz? Or was the goal even bigger – to wheedle another million or two out of someone’s coffers to help finance the reconstruction of the Bolshoi’s main building? And the media; they couldn’t be jumping on a careening bandwagon simply because it’s there, could they?

You know what? I don’t give a damn. And here’s why: “The Children of Rosenthal” is the real thing, fresh, funny and lively. It is probably the most original work the Bolshoi has produced in recent memory. It is, after all, the first contemporary opera the theater has mounted in, count ’em, 26 years. For some of us who dwell beyond the pale of the tight-knit circle of opera devotees, the genre has smelled of carrion and layered museum dust for, oh, a good 50 to 80 years. The same old pomp and the same old circumstances rehashed and regurgitated.

“The Children of Rosenthal” skips right over all of that. As in all good theater, it was a team effort.

There are no two ways about it; the music by Leonid Desyatnikov is pleasant and catchy. But from the point of view of someone steeped in the lowly anarchy and crude clumsiness of dramatic theater, it was the writer and the director who engineered this show’s triumph. The libretto by Vladimir Sorokin, the apparent cause of the pre-premiere scandal due to his reputation as a controversial novelist, is a model of brevity, wit and dynamism – to say nothing of chastity. The direction by the renowned Eimuntas Nekrosius is everything you would expect from this wizard of detail, and more.

Sorokin’s story about a scientist who, through cloning processes developed in Hitler’s Germany and perfected in Stalin’s Soviet Union, brings back five great composers from the dead is a perfect match for a genre like opera with all its pageantry, conventions and love of everything bigger than life. The early focus is on Rosenthal and his laboratory, but once he “gives rebirth” to Mussorgsky, Tchaikovsky, Verdi, Wagner and Mozart, they become the focus. Travesty meets tragedy when the five geniuses are cast into the street amidst swarms of grungy, hostile people and animals.

With a few clever, economic strokes – usually a disembodied voice narrating brief details – Sorokin expands the tale to reflect far-reaching political and social realities in the 20th century. Some of these moments, such as the televised face of Boris Yeltsin announcing it is “time to stop this Stalinist nonsense” evoked a burst of applause from the crowd at the second performance last week.

Perhaps one of the most intriguing aspects of “The Children of Rosenthal” is that it is a futuristic story set in the relatively distant past. That makes it a fascinating artistic commentary on the speed with which our world now changes. The vertigo of taking a glimpse into the future by looking into the past is both bracing and entertaining thanks to the intelligence and humor that the troika of creators brings to the show.

All of them play joyfully with the cliches of opera, creating a work that parodies and parries with the operatic tradition but is strong enough to stand on its own. Sorokin and Desyatnikov supply several sublime quotes from Tchaikovsky’s “Eugene Onegin,” creating an amusing confusion of character, art, history and reality. Nekrosius provides a signal almost immediately that he has no intention of taking the rituals of opera seriously: During the opening minutes he has a prompter’s box race and spin across the stage as though it has been cut loose of its moorings and the prompter inside it has gone berzerk.

The relentless, eccentric activity that Nekrosius creates on stage primarily with the chorus and the corps de ballet, but also with the principals, vividly brings to life the chaos of a world being turned upside down. In one scene, a mock lyrical tryst of Tchaikovsky and his nanny that echoes “Eugene Onegin,” he even has a group of delinquent children run out on stage to overturn the table the nanny has just set. As in his prodigious dramatic productions, Nekrosius almost always has three or four layers of action occurring on stage at any one time. It makes for a feast of impressions.

The cast at the Bolshoi eagerly takes to Nekrosius’ physical jokes and skits, so unusual in opera where the singing is expected to overshadow everything else. I thought the entire corps de ballet and Maxim Paster’s sad-sack Tchaikovsky were especially good, although by saying so I do a disservice to many lively performers. In short, “The Children of Rosenthal” deserves every bit of attention it gets – because it is a marvelous piece of theater with music.