The pages are lost, during the death of the Globe, but in order to keep the links working, I has to place the templates for now. 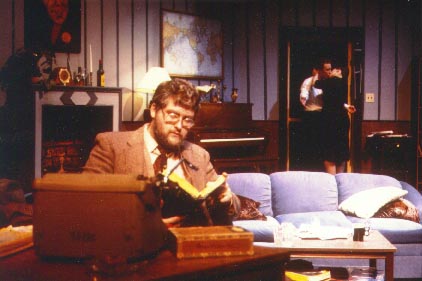 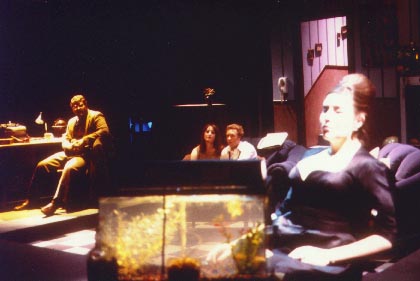 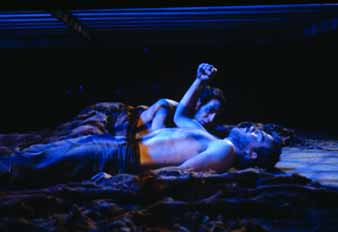 Who's Afraid of Virginia Woolf? Play in three acts by Edward Albee, published and produced in 1962. The action takes place in the living room of a middle-aged couple, George and Martha, who have come home from a faculty party drunk and quarrelsome. When Nick, a young biology professor, and his strange wife Honey stop by for a nightcap, they are enlisted as fellow fighters, and the battle begins. A long night of malicious games, insults, humiliations, betrayals, painful confrontations, and savage witticisms ensues. The secrets of both couples are laid bare and illusions are viciously exposed. When, in a climactic moment, George decides to "kill" the son they have invented to compensate for their childlessness, George and Martha finally face the truth and, in a quiet ending to a noisy play, stand together against the world, sharing their sorrow.

Edward Albee: A Singular Journey With his off-Broadway success The Zoo Story in 1960 and the Broadway smash Who's Afraid of Virginia Woolf? in 1962, Edward Albee announced himself as his generation's great American playwright. He had an unhappy childhood as the adopted son of wealthy suburbanites with no interest in his feelings or talents, and later immersed himself in the flourishing (but still closeted) New York gay scene of the 1950s. These seminal experiences gave Albee a sardonic, essentially bleak view of human relations that suited the questioning spirit of the '60s, as did his plays' absurdist tone and often experimental techniques. Alcoholism and bad reviews plagued him through much of the 1970s and '80s, but he emerged triumphant and sober in 1994 with the play Three Tall Women, which marked his mature understanding of his mother's life and won him a third Pulitzer Prize. Mel Gussow observed much of this personal and professional journey as a theater critic and an acquaintance; his book is a traditional biography based on research and interviews--with colleagues and friends as well as Albee himself--that also judiciously uses the author's firsthand experiences. (A section about the playwright's drunken rudeness at a dinner party and subsequent apologetic letter to Gussow is particularly revealing.) Gussow limns his subject's life with candor, but without prurience, and lucidly conveys Albee's importance in the American theater.

The Collected Plays Of Edward Albee Three-time Pulitzer Prize-winner and recipient of three Tony Awards, Edward Albee was awarded the Gold Medal in Drama from the American Academy of Arts and Letters in 1980, and in 1996 he received both the Kennedy Center Honors and the National Medal of Arts. Ben Brantley of The New York Times has described him as "one of the few genuinely great living American writers." Now, The Overlook Press is proud to announce publication of the first volume of a three-volume collection of all of this master’s plays, some of which have been out of print for years.

Volume I contains the eight plays written by Albee during his first decade as a playwright, from 1958 through 1965. These range from the four brilliant one-act plays with which he exploded on the New York theater scene in 1958-59 (The Zoo Story, The Death of Bessie Smith, The Sandbox, and The American Dream) to his early masterpiece, Who’s Afraid of Virginia Woolf? (1961-62). They also include two adaptations from notable American novels (The Ballad of the Sad Café and Malcolm) and Albee’s mysteriously fascinating Tiny Alice. The volume includes a new introduction by Mr. Albee.

The Goat, or, Who Is Sylvia? ... The playwright himself describes it this way: Every civilization sets quite arbitrary limits to its tolerances. The play is about a family that is deeply rocked by an unimaginable event and they solve that problem. It is my hope that people will think afresh about whether or not all the values they hold are valid

Where is the article on the show for the Albee conference?

3 Tall Women (Plume Drama) Albee's drama of an old woman coming to grips with her life and approaching death earned him his third Pulitzer.

Albee's best plays have always walked a line between heightened realism and dark comedy. Even his most surreal works are populated with characters who wouldn't seem out of place in real life. His 1994 Pulitzer Prize winner runs true to form. It begins as a naturalistic conversation among three women (identified as A, B, and C) from successive generations who meet in a hospital room. Each is undergoing a change from one life phase to another, and each faces her travails and disappointments with lots of Albee's trademark bitter wit. In the second act, however, the three women become representatives of the same person at different ages (26, 52, late 80s), and their bickering talk becomes a touching internal colloquy about life, love, and the inevitability of loss. Not since Beckett's brooding meditation Krapp's Last Tape has a playwright dealt so movingly with the subject of disappointment, aging, and death.

Read Albee page and other on American drama in script.vtheatre.net! 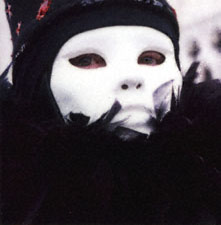